For example, conflict can be emotional.  Angry people are not able to focus on what they need because their focus is on being angry. They get caught up in the “right/wrong” trap. This limits their ability to assess whether other options for settlement are as good as or better for meeting their needs than their position.

People also worry about whether they are giving up too much to the other side, which means they are not thinking about their own needs. Many good options for resolving conflict are lost because parties lose the ability to see issues clearly, which results in an inability to focus on their needs.

In her bestselling book, The Conflict Pivot: Turning Conflict into Peace of Mind, Tammy Lenski tells a true story about a pivotal moment in the 1978 secret negotiations between then Egyptian President Anwar El Sadat and Israeli Prime Minister Menachem Begin that led to the Camp David Accords.

After two weeks of negotiation brokered by US President James “Jimmy” Carter, it appeared that the talks had come to an end with no solution in sight and that Sadat and Begin were not going to agree.  Then something happened to break the stalemate (Conflict Pivot at pp 99-98):

On the thirteenth day the negotiations at Camp David had completely broken down, and it appeared that Begin and Sadat would return home with no agreement.  Carter later related a pivotal moment that kept them at the table: 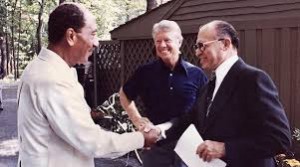 Earlier, my secretary, Susan Clough Had brought me some photographs of Begin, Sadat and me.  They had already been signed by President Sadat, and Prime Minister Begin has requested that I autograph them for his grandchildren. Knowing the trouble we were in with the Israelis, Susan suggested that she go and get the actual names of the grandchildren, so that I could personalize each picture.  I did this, and walked over to Begin’s cabin with them.  He was sitting on the front porch distraught and nervous because the talks had finally broken down at the last minute.

I handed him the photographs.  He took them and thanked me.  Then he happened to look down and saw that his granddaughter’s name was on the top one.  He spoke it aloud and then looked at each photograph individually, repeating the name of the grandchild I had written on it.  His lips trembled, and tears welled up in his eyes.  He told me a little bit about each child, and especially about the one who seemed to be his favorite.  We were both emotional as we talked quietly for a few minutes about grandchildren and about war.”

Why was that moment between Carter and Begin so pivotal? Because in that moment, Begin understood what he was negotiating for: long-term peace so that his grandchildren could live in a safer world. That need was so important that the parties were able to agree to the framework of the long-lasting peace agreement between Israel and Egypt and for which Sadat and Begin were awarded the Nobel Peace Prize in 1978.

This story helps to illustrate that often the very reason giving rise to the conflict (the important need) is the also the key for resolving the conflict.  The problem is that when people are in the heat of conflict, they often either don’t focus on what matters or are so caught up in the moment that they lose sight of what matters.  When this happens they lose sight of resolutions that work.

The role of the mediator or coach is to help remove the conflict “blinders” so that the parties can become clear about their needs, just as Prime Minister Begin became clear about what mattered in the Camp David negotiations.

By Ronald Pizzo. Ron practices in our mediation, litigation and conflict resolution group.  He holds the QMed. designation and is a certified mediator.  Ron is also a certified coach having completed training the CTI co-active coaching training.  Ron has a thriving coaching business helping professionals, including lawyers, in their working world.