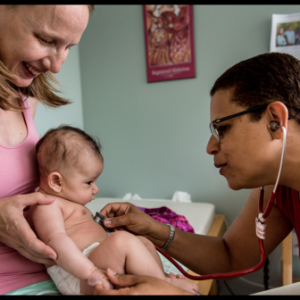 On September 24, 2018, at the outset of Canada’s Gender Equality Week, the Association of Ontario Midwives obtained a historic win from the Human Rights Tribunal of Ontario.

This decision is an important victory not just for midwives in Ontario, but for other sex-segregated workers and equity-seeking groups who face systemic discrimination across Canada. Read the decision here.

Who are the midwives?

The AOM has existed since the early 1980s. It is the recognized representative of all registered midwives in Ontario, where there are around 900 practicing midwives, virtually all of whom are women. The AOM negotiates with the government as independent contractors.

In Ontario, and now in many other provinces, women with normal pregnancies can choose an autonomous, publicly-funded midwife as the primary care provider for themselves and their newborns. Midwives are university-educated experts in pregnancy, birth and newborn care. They are trained in emergency management. Their work is informed by the most current maternal and newborn care research and evidence.

The midwife takes the place of a family physician or obstetrician throughout pregnancy, labour, and the first six weeks after delivery. Midwifery aims to offer a comprehensive model of care that actively supports women’s empowerment and informed choice.

What was the complaint about?

In this complex case, the midwives argued that Ontario’s Ministry of Health and Long-Term Care discriminated against midwives for over 20 years on the basis of sex, with respect to their compensation and funding formula.

The AOM emphasized that midwifery is a historically marginalized health care profession. It argued that it represents a “gender trifecta” of services, provided almost exclusively (1) by women, (2) for women, and (3) in relation to women’s reproductive health. The Tribunal found this to be “a very apt description of the strong association…between midwives and gender.”

When midwifery was established as a regulated profession in 1994, the Ontario Government set midwives’ compensation in a way that recognized the right of midwives and their clients to equal treatment without discrimination. It acknowledged the Ministry’s duty to develop compensation practices that proactively incorporate an awareness of its human rights obligations. The midwives argued that the Ministry has failed to follow through on this promise and to ensure that midwives’ labour was not devalued in relation to others, on account of their gender and the nature of their work.

What did the Tribunal decide?

The Tribunal held that, despite the AOM having squarely raised the issue of sex discrimination in contract negotiations over the years, the Ministry failed to fulfill its obligation to monitor their compensation levels, as it had done for other, non-sex-segregated health professionals. Since 2005, the Ministry failed to ensure midwives’ compensation remained fair, competitive and not impacted by discrimination.

The Tribunal found that the Ministry’s conduct and delays in negotiations over the years resulted in a significant compensation gap between midwives and physicians, to the extent they provide comparable services. This amounted to systemic discrimination against midwives based on sex.

Midwives have, since 2010, attempted to negotiate in a context where the [Ministry] no longer abides by the foundational principles established in 1993 or recognizes the effects of gender on compensation. This perpetuates the historic disadvantage midwives have experienced as sex-segregated workers. It also undermines the dignity of midwives who now find themselves having to explain why they should be compared to physicians for compensation purposes more than 20 years after this principle was established. It is a denial of substantive equality that midwives must negotiate in a context where there is no recognition of the potential negative impact of gender on their compensation.

Why does it matter?

First, the decision is an important validation of the value of the midwifery model of care for pregnancy, birth and post-partum. It further demonstrates how, despite good intentions, deeply held attitudes often lead people to reward the skills and job content of traditionally “male work” and to ignore or give less value to what is viewed as “women’s work.”

More broadly, this is an important precedent for other sex-segregated and equity-seeking groups. It confirms the duty of employers and governments to ensure that compensation practices are proactively monitored for any adverse impact with respect to gender and other protected grounds of discrimination.

Congratulations to the AOM and to their legal counsel for this hard-earned victory!